Time May Change Me | How Sleep Changes Across a Lifetime

What You’ll Learn in This Article

In the first two parts of this series, we talked about the fact that every part of your body works off of internal clocks, which are trying to synchronize to each other inside you, and to keep you aligned with the natural day-night cycle. We also said that different people maintain different alignments to the world, so that some are early types, and some are late. There is a broad range of these so-called “chronotypes,” and whether you are a morning “lark” or a night “owl” appears to be determined by your genes.

Our phase – the relative alignment of your activity to the day – does change in predictable ways across our lifetime.

Given that late-shift work causes health problems even when the shift is constant – as opposed to rotating shifts, which are even harder on the body – it seems like we can’t change our chronotype easily. Despite this, our phase – the relative alignment of your activity to the day – does change in predictable ways across our lifetime.

Childhood Schedules Are on the Earlier Side

When we’re born, we don’t have an obvious circadian phase at all. The central circadian regulators in our brain come online late in development, and besides, who has time for a full night when there’s all that milk to drink? It’s totally natural that babies (and new mothers) have trouble getting consolidated sleep. The day has been overwhelmed by the faster feeding cycle.

After a couple months though, consolidation sets in, and mothers (and hopefully babies with them) come to a stable, consolidated daily bout of sleep. After that, the new person starts to express their chronotype, but kids all tend to be a little on the earlier side. That’s because sex hormones delay the clock (make it run later), which brings us to the next big circadian change moment.

As we all remember from awkward sex-ed movies in school, when puberty hits, you may notice some changes. What those videos should include is: “you may start sleeping where you didn’t before.” As sex hormones rise, they push the clock later, and give rise to the stereotype of the lazy teenager. Teenagers are not inherently lazy, but they are socially jetlagged in a big way by demands that they continue to get up early for school even as their circadian rhythms tell them to sleep in and stay up late. The loss of sleep, and the inability to have a stable schedule, does real harm.

People work better when they’re not jetlagged every day.

Students at greater conflict with their school schedules do worse in classes on average, hurting their chances for college and their ability to get something positive out of education. Conversely, delaying school start times drives down teacher conflict, drug use, and drop-out rates. Because people work better when they’re not jetlagged every day. Shouldn’t be a shocker, but our society has been very slow to catch up and fix school schedules based on our biological circadian constraints.

The Circadian Challenges of Adulthood

Once we get out of school we also have social jetlag from work, but that’s not such a big deal because, first, we’re older and our brains and bodies are not developing so much, meaning any insult may not feel good, but shouldn’t have much lasting impact. Second, as the surge of sex hormones ebbs, our clocks begin to get earlier again, so that by our 30s or so, we’re back towards our childhood schedules.

Then as we age, the clocks start to fall apart. Sleeping gets harder and moving can get harder (because of demands for hours at a desk, or because of those old joints, or both). We also spend more time in doors, especially if we’re in an assisted living situation. That’s a vicious cycle, where we’re up at night so we get stimulated at the wrong time of day, and we’re not active enough to counterbalance that when the sun is out.

Both good sleep at night, and sunlight and activity in the day, help keep our clocks synchronized.

Both good sleep at night, and sunlight and activity in the day, help keep our clocks synchronized, whereas the opposite speeds their decoherence, which is what was making us have sleep problems to begin with. The more that accelerates, the faster we age and die.

Tracking Your Rhythm Across Lifetime

The hope I hold is that sensors and data processing will enable us to get feedback about how we’re doing. What chronotype we are, how we’re sleeping, and eventually, how that’s changing across our lives. Then when we get a job, have a kid, hit menopause or retire, we can know how to adjust our lifestyles to keep our clocks wound and running.

As Bowie said, “time may change me, but I can’t trace time.” Well, we’re working on that one for you, David. 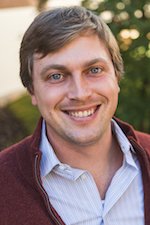 Dr. Smarr received his Ph.D. in Neurobiology and Behavior at the University of Washington in Seattle, and is currently a National Institutes of Health Fellow at UC Berkeley, where he works with Professor Kriegsfeld in the Psychology Department. His work focuses on understanding how biological timeseries carry information useful for predictive medicine and personalized wellness. His specialties include circadian rhythms, sleep, female reproductive rhythms, and computational signal processing.

If you’re interested in tracking your sleep and you don’t yet have the tools for it, have a look at the Oura ring in the Oura Shop. If you have an Oura ring, read this article to get to know the Oura sleep metrics, or dig deep into your data in the Oura Cloud Beta.

Why I Chose the Oura Ring | Ben Greenfield

In the final moments before the Biohacker Summit 2017 in Helsinki, we had a quick chat with personal trainer, biohacker, speaker and performance coach Ben Greenfield about how and why he uses the Oura ring.

Keeping an eye on your body temperature trends provides important insights into your health and fitness.